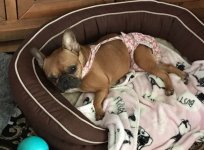 Darla is a beautiful, 8-year-old sweetheart who was surrendered to FBV by her previous owner when she started experiencing weakness in her rear and incontinence. She has numerous ongoing health issues. Darla has longstanding neurological deficits caused by her original backend weakness from a spinal malformation (either congenital or from an injury) and new ones that stem from meningitis that she fought a year ago. Although Darla is able to walk, she does have some dragging of her feet and tires easily. She has a cart that allows her to be out of her stroller and have independent movement without injuring herself, but she doesn't require it unless she is on a longer outing. She also would rather be without it.

She has right sided facial paralysis. Her right ear doesn't move, and it is difficult for her to eat/chew. Her right eye doesn't completely close and was scarred during the meningitis, so she is blind in that eye. She requires eye medication at least twice a day. Darla is difficult to feed as she has a poor appetite and requires patience and determination, involving hand feeding and coercion, in order to get her to take enough nutrition. She had a feeding tube during the meningitis because she refused all food and has never really gotten back to normal. She does always want to know what you’re eating, though, and to have the option to have some.

She is unable to urinate on her own; she has an atonic bladder which requires bladder expression at least three times a day. She is difficult to express at times as she has a rigid abdomen and spastic bladder. However, it is imperative to get all the residual urine because she is prone to UTIs. She is also incontinent of bowel but wears diapers with no problem. She does have some feeling that she has to go and will try to run to the door sometimes but does not always make it.

She gets along with all people - she absolutely loves them! There has been zero aggression or attitude with her foster mom except during nail time which she abhors with all her being and will do anything to escape from. She is, however, a diva with other animals and must find her place in the pack. She is bossy and thinks she rules the house. She rules over the large, resident Olde English Bulldog with an iron fist because he allows her to, but she and the resident female Frenchie have scuffled many times over who is the boss. She needs guidance for acceptable dog to dog interaction. She doesn’t love to share but will not attack over toys. She does, however, tend to guard her food even if she has no intentions of eating it and even though she is fed separately from the resident dogs. Darla would do best with laid back, non-dominant dogs and doggie parents who know how to manage little rascals. She has no idea she is disabled and will take on a mountain lion if she feels like it. She does not prefer cats and although she doesn’t bark anymore at them, if given the chance she will go after them. Therefore, a forever home without cats would be best.

Darla is a clown and a mischief maker. She is a happy dog that loves to play with stuffies and balls. She also loves to chew antlers and to play "keep away" with her people…she loves to be chased. She hops up and down to get attention….she knows she is a funny girl! She demands what she wants by barking relentlessly in the direction of whatever it is she desires. She also likes to play with other dogs but on her terms; she has to be in the mood. She loves being outside and to go for walks in and out of her stroller.

She is crate trained but prefers not to be crated. She is also leash trained. While Darla tries to 'sit' and knows what the command means, her back end doesn't cooperate. She comes when called but often chooses to ignore 'leave it.’ She requires someone to be home with her all day or someone who works but can provide her with a midday visit for her potty needs.

Darla needs a home that will understand her special needs and find them charming and not annoying. She requires extra time and effort to feed and express but once you get the hang of it, she’s totally worth it. Her foster mom wants her to have a family who appreciates her wonderful personality and has the time and inclination to keep her as healthy as she has fought to be again. Darla is a loving, adorable and funny girl but remains medically fragile and needs a vigilant family. Her forever home must be near the Philadelphia area so that her foster mom can be available as needed and teach Darla’s adopter to properly care for her.

Darla is absolutely hilarious and knows it! She demands belly rubs and playtime and should be the center of attention. She loves attention and affection, and as any princess should, pretty much gets what she wants!

She is truly a miracle dog because not only did she survive her horrible illness (meningitis), but she is thriving! She is a happy girl who loves life and will bring joy to anyone lucky enough to experience her. If you feel you can provide this special gal with what she needs and deserves, please apply.


Please view the adoption process and fill out an application at their website ---> frenchbulldogvillage.net

Please let them know you found them on French Bulldog News! :2thumbs:
You must log in or register to reply here.

I left our Frenchie outside!

What do you use for IVDD management??

AVAILABLE FOR ADOPTION! ~Elsie~French Bulldog Available for Adoption in Texas